For all three projects I used the same technique to produce my illustrations. I will now describe the process of this technique: to begin with I need a very sleek surface. I usually use the white back side of old posters. That is very sleek and shiny paper. On this paper I apply black oil pastel chalk. I completely cover the paper with black. This is now my readily prepared medium. To create images I use different pins and needles which I dulled with sandpaper to different degrees. With these variously prepared needles I am able to draw differently fine lines. I do so by scraping with the needles into my oil pastel layer. A white line is being created. I also have a wood cut tool which I use for scraping away a bigger amount of oil pastel chalk for bigger white shapes.

The visual outcome is similar to wood and linoleum cut or scraper board. I very much enjoy the thinking it needs (my technique is the other way around, usually you draw a dark line on a white surface and I draw a white line on a black surface). Also I enjoy the crafting of fighting against a material, finding solutions to the restrictions the material bears.

The technique I invented is quite imprecise, it is very rough and messy. The oil pastel chalk is hard to remove steadily. This has two advantages: Firstly I not only personally find the rough look appealing, but also I think it gives a humanity to illustrations every when using very strict, rigid shapes. It is also visually an interesting contrast to the roughness and the graphic lines and shapes. Secondly I am a perfectionist, tend to loose myself in details and often struggle to find simple strong shapes. This technique forces me to simplify and abstract which would usually be hard for me.

Also the typography I used is the same in all projects. In order to make the style of the typography fit to my illustrations, I scraped them by hand the same way I produced the images.  I did this procedure for my „an art student in Bristol“-poster and since it took me about a day to hand scrape al the words, I decided to create a font out of my typography style. After some research I found the website „calligraphr“. On which one can upload single letters which are then transformed into a font. As a result, my other two projects are typed with my own font.

I decided not to stick too rigidly to the brief. That has several reasons. For strangers it is more interesting and easier to relate to the figure of an art student than to me specifically.  Also I think it will recommend myself more to clients who view my portfolio, when I show that I can portrait a topic and not just me. Last but not least I have a wider range of use for my poster in the future when the theme is more abstract.

The original illustrations are black and white. The colour separation is done digitally.

Right at the beginning of the project I decided to divide the poster into a lot of small panels to describe a topic which has so many different aspects.

I made bigger and smaller panels to have an interesting rhythm and to make the poster look plastically and not flat. This is the reason why the bigger panels are in the middle and the smaller ones in the corners. I tried to spread the colours evenly, especially the small white spaces. I thought a lot about a good balance between chaos and organisation and there is a grid underlying the poster

I tried to find interesting, sometimes funny communicative ideas, that do not always need to be deciphered to one certain thought. Also to hit the artistic tone, the visual language of the poster is supposed to be rather edgy and quirky.

Some illustrations are paired with a word. The illustration of each pair shows an interpretation of the word. Every word refers to one specific image, but is not supposed to be only an addition to it, but an independent aspect of the poster. This is why the text also has its own panels.

The words that are associated with studying art, especially with emotions and mindsets that occur. The experiencing of the poster is made more interesting by having two layers of information, images and text.

It is the first screen print I made myself, so it was quite challenging to prepare the motive for screen printing, especially to think about trapping.

To pick the right colours was very difficult, since I planned from the beginning to screen print and wanted to keep the number of screens as small as possible, I needed to find two colours in addition to black which would create good mixing colours. I also wanted the colours to resemble an artistic, but also maritime atmosphere.

But the biggest challenge was the arrangement of the panels, since there were a lot of conditions to satisfy, concerning which motive can be depicted big and which small, in what panel shape do the motives fit, which word can be partnered with which image, when the right place is found, is the word to long for the space in the panel etc.. All these difficulties were increased by the fact that I make all drafts and illustrations manually, so they can not easily be deformed or scaled.

Resolutions for next time

In the next screen printing session, I would like to achieve more vibrant colours. Since I have to mix the colours by hand, it is very difficult not to loose the vividness when mixing several colours together. Also I don’t think I will do a poster project with so many small panels again. I am happy with having done it once, but it is too much work for doing it on a regular basis.

Since I have never done such a long animation before, I decided to play it save and chose a simple story with a classical narration arch of slowly building up excitement through repetition about a growing project, obstacle, overcoming obstacle and reconciliation. The flower can be seen as a metaphor for any project in a creative history.

In the beginning of the project I watched a lot of Arte „Karambolage“ episodes. Arte is a German/French publish service TV channel that promotes cultural programming. „Karambolage“ is a series where German or French peculiarities are being explained within a view minutes with a big variety of different animation styles.

Another inspiration were „Sendung mit der Maus“-animations, which are a small part of a very old, very famous German educational TV show for children. In the 30 second animations the Maus (mouse) usually solves a problem in a unique, funny way, sometimes accompanied by its friends the elefant and the duck.

Very influential for my animation was David Plunkert, an American illustrator, who also did some animations for music videos. I liked especially the animation for  John Linnell’s song „NVNC AVT NVMQVAM“.

It is very difficult to know, how to organise such a long animation in After Effects in order to be able to make changes easily. I did not organise it well and ended up using half a day for making a little change, because my animation elements were so scattered. In general there is a lot to know about After Effects and sometimes you are not aware that there is a tool for an easy solution for one of the issues. I for example found out very late about the „parenting“ option in AE, which would have saved me a lot of trouble in the process.

Audio is the big unresolved problem in my animation. I had the misconception that it would be easier to add music instead of sound effects. But I think since my animation already has a very distinct rhythm because of the walking and the popping up of the growing flower, it turned out to be extremely difficult to find music which fits remotely. So I would like to improve that after the handing in.

I have a vision how the music could sound: some basic piano chords which are in tact with the walking and then some highlight tunes when some growing and popping up happens. The easiest way to do that would be to compose it myself, but maybe the effort is inordinately big in comparison to this little animation.

To take an existing song and try to cut it with After Effects turned out to be too difficult, because I don’t have the abilities to cut it smoothly in little pieces so that I can make it fit to what happens in the video. Sometimes the accentuation works, but most of the time it is off.

What I have at the moment is silent movie music (I thought it is an interesting contrast between my robotic movements and the jolly music).

For future amendments I think sound effects and no music could be the solution after all (not typical ones like footsteps), but maybe some knocking, percussion glockenspiel sounds. They could be easier to compose.

I interpreted the manifesto as reflection over what illustration means to me and how I deal with my profession on a daily basis. For inspiration I mainly watched the Hillman Curtis artist series and I have a lot of notes I take from the wisdom of my professor Henning Wagenbreth in Berlin.

The typography is a mixture of my own scrap type font and Space Mono Regular (one of the free google fonts Jono introduced us to). It creates an interesting contrast between my very hand crafty looking self made font and the computerish mono space font. Also I found it interesting to use monospace, because I have not done it before. It is challenging to set a harmonious body text with this type of font.

I wanted to make an illustration accompanying the text. This is my first trial:

I was not satisfied with this motive so I decided to pursue an other idea. Over the last months I just for fun have been making little images of a child poking its nose. I figured in combination with the title „digging deep“, they get a funny meaning.

After some experimenting with the arrangement of text and images I found the folding pamphlet medium most fitting. 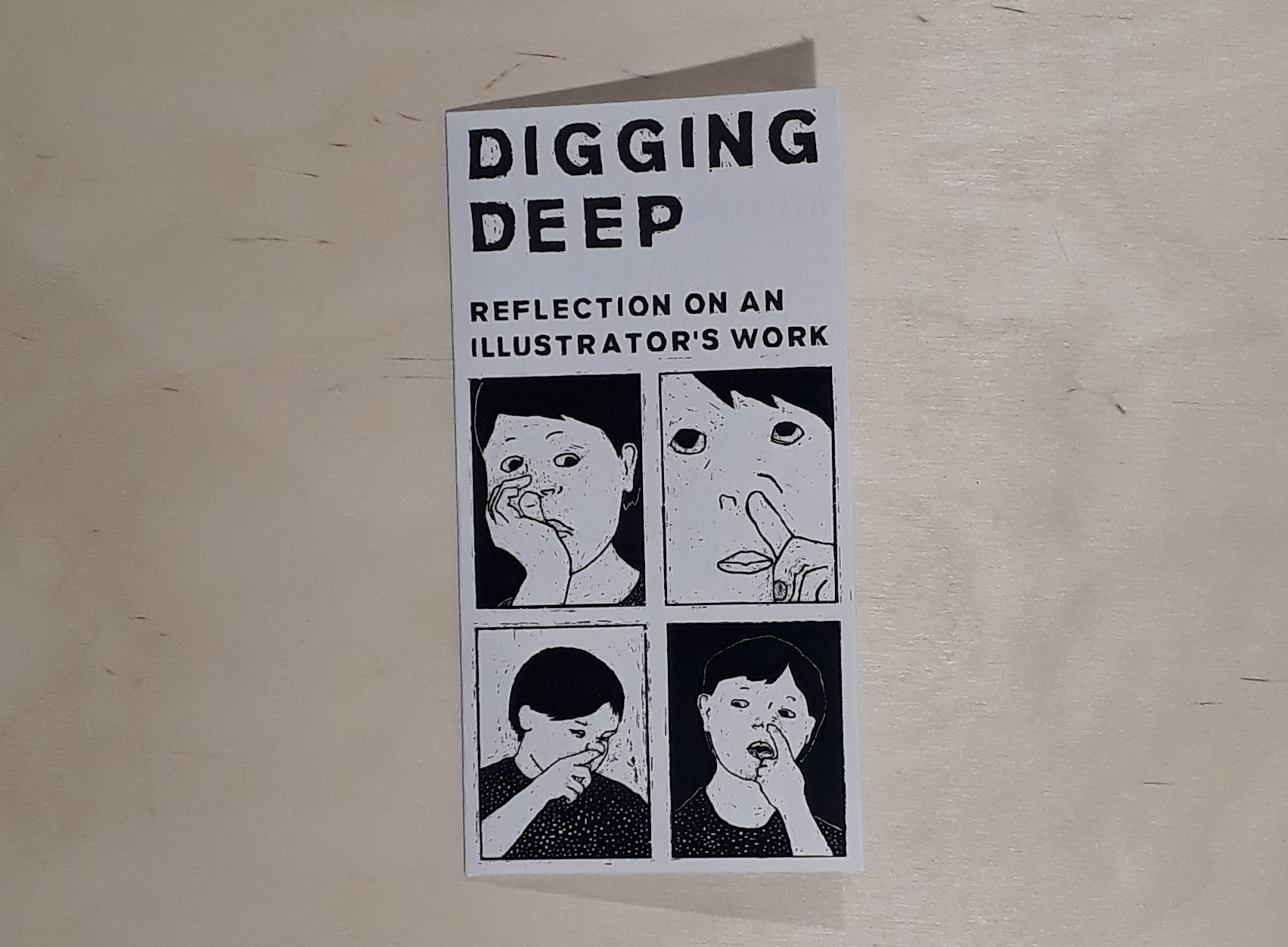 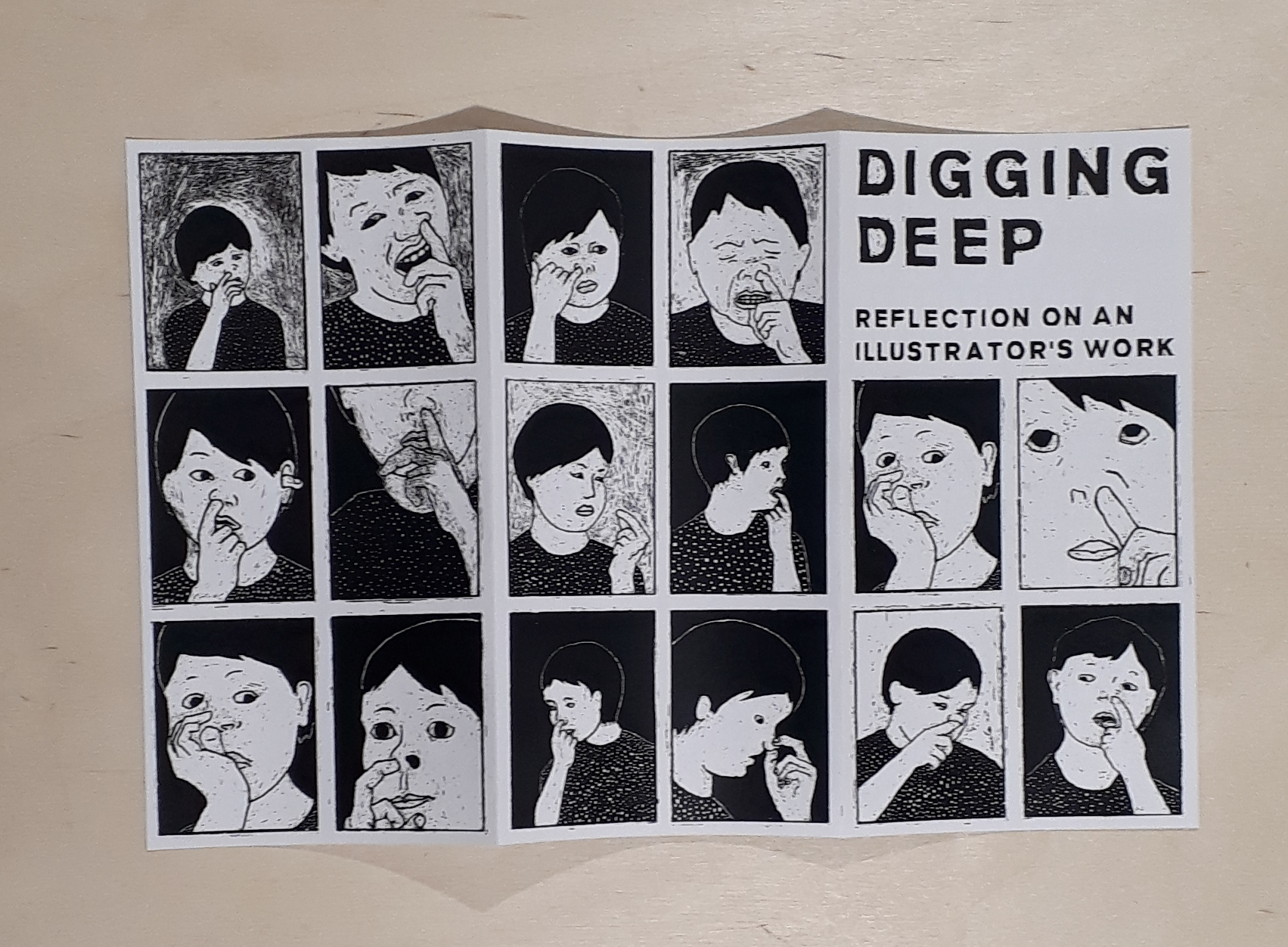